A team of students from the HND Sound Production course managed to secure access to a rather special environment for their ambient recording project. Tasked with capturing a sound source in an acoustically interesting environment, Erin McHugh, Andrew Napier, Joseph Welsh & Shaun Cassidy contacted the key holders for the Inchindown oil tanks in Invergordon, Ross-shire and were delighted when they agreed to provide access for their surround sound project. Led by the inimitable Preston White, who as guide also gave the team a detailed background history regarding the impressive facility, the students set off on their underground adventure! 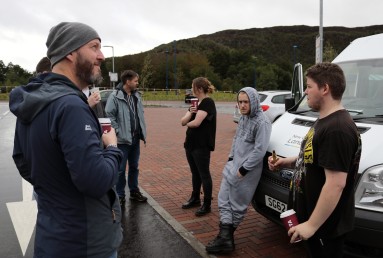 The all important microphones

The disused oil depot is comprised of six chambers, five of which are 237m long, 9m wide with arched roofs 13.5m high, built into the hillside surrounding Invergordon and were used as a bomb proof store of furnace fuel oil for the local Navy base during the second world war. Reaching the chambers is achieved by navigating along a pipe of just 18″ diameter and proved to be quite the challenge for both students and their equipment! 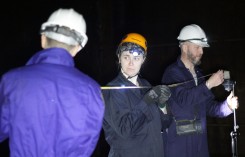 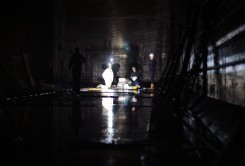 Furnace oil residue within the chamber made working conditions far trickier than the usual record locations, though they dutifully set about their task of capturing student Matthew Hardie on violin in a space very few have had the privilege to access. The chambers hold the record for having the longest reverberation time in a man-made structure and as such, are often sought out by audio enthusiasts hoping to experience this unique characteristic. Sound Production course lecturers David Burnett & Keir Long accompanied the group whilst Film & Television student James Reid and lecturer Alan Moffat managed to capture the days exciting events and put together the short film above.

1 reply on “The Sound Of The Underground”

Fantastic project. Congrats to all involved.